The High Cost of Inconsistency 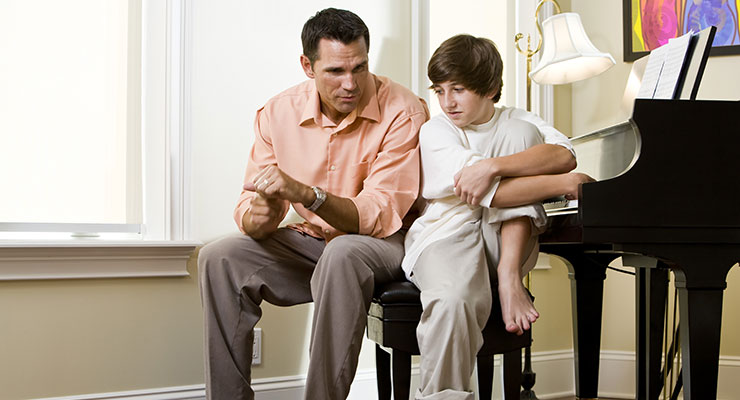 Did you ever have one of those, “Alright Son, here’s the deal…”  talks with your dad?  You know, the ones that happen right after you’ve done something stupid and the old man, in a moment of complete honesty, lets down the veil of parental perfection and sets you straight by telling you about the time when he did the same thing.

I can’t say that I enjoyed those, because no one with an once of pride or self-respect enjoys feeling stupid.  But, I can say that I remember them all.  Unlike the countless birthdays when I couldn’t tell you which superhero was on the cake or what gifts I received, I can recall every one of those talks nearly word for word.

Maybe it’s because moments of real human revealation are so incredibly rare.  No, that’s not a typo, I made it up, because I’m not talking about revelation like when you learn something new.  I mean revealation like when you reveal something about yourself that lays your soul bare for viewing in a way that lets some poor unfortunate individual close to you realize that he isn’t the first or last one to screw up.

Today we’re going to have one of those talks, because frankly, I’ve been watching you and I saw what you did.  Actually, that’s not true – I’m just messing with you.  However, if you’ve been publishing website content for any length of time, you’ve been where we’re going. So, well, your mother asked me to have a talk with you about the High Cost of Inconsistency, so here goes.

The Impacts of Inconsistency

, don’t blow this off, because without regular traffic you’re back to talking to yourself.  And, if you keep going back there, sooner or later the nice young men in clean white suits are going to lock you up and force feed you yellow jello.

The first impact of inconsistency is the damage suffered by your Confidence.  The let-down you experience when your traffic declines is actually worse than staring a no traffic day after day, because you actually had something to lose.

When there’s nothing in the first place, you wonder if you’ll ever see progress and that’s no fun.  But, when there’s progress and then it disappears, you wonder if you’ll ever be able to get it back.  The “in your head” answer is, “Of course you can!  You did it once.  You can do it again.”  That’s only so powerful when the “in your heart” answer is, “I just don’t know if I can.”

The second impact of inconsistency is the gaping hole in your Credibility.  It’s hard to get people to take you seriously as a pro when it looks like you ran out of useful stuff to say (whether you did or not, it looks like you did and that is what people will think).

People who are authorities on a subject are authorities, because they know it so well that they can talk about it forever without running out of content.  They speak from knowledge, experience, and passion.  Those things don’t tend to run dry.

The third impact of inconsistency is the scattering of your Community.  It takes a long time and lots of nurturing to build a community online.  The people on your mailing list are a little safer than those in your social media groups, but, make no mistake, there’s always someone out there ready to take your people if you don’t work to keep them.

Your community needs to be able to count on you.  They need to find you on the same bat-channel at the same bat-time.  If you’re really providing killer content that’s educational, entertaining, and informative, they’re looking for you (and hopefully telling others about you).  Don’t make them work to find you.  Make it as easy as possible for them to consume your content.  That begins with consistency.

I remember when I began posting regularly, how my traffic increased.  It seemed like the visitors to my website grew exponentially overnight.  They really didn’t, it took a month or so of consistent publishing to see real growth, but when you’re coming from virtually no traffic, any increase looks huge.

There I was going like gang busters and then I had one of those weeks.  You know the ones.  Weeks when there seems to be a distraction or interruption every 30 seconds and the deadlines are bearing down hard.  That’s when I saw my two weeks of publishing cushion evaporate real fast.  One minute I was six posts ahead of myself and the next I was struggling to get anything out on time.

Before I knew it, I was so behind that I started publishing at all hours of any day of the week.  Remember when I told about which days were best to post?  Well, I wasn’t kidding. That stuff is true and I shared it, because I found it out the hard way.  Don’t expect to get the same traffic out of a post published at 8 pm on Saturday night that you would get from one published at 8 am on Monday morning.

If it hadn’t been for the groups I belong to on my social media sites, I would have been dead in the water.  This brings me to the two most valuable lessons I learned from this experience.

1) Get back to your schedule as quickly as possible.

Initially, I got my Rocky Balboa on and tried to fight my way back.  But, instead of pulling ahead, I just fell further and further behind.  This led to the poor decision to publish at crappy times on off days just to “get something out.”  I wasted a couple of weeks like this and, like our hero early in the movie,  my traffic took a serious beating.

I was so determined to regain my momentum that I become obsessed with publishing three times a week regardless of when I got it done.  If I had been willing to drop one post and only put two out that week, I could have taken the weekend to get back on top of things.

However, by insisting on three a week, I floundered trying to make it happen.  You can always write an extra post later.  Just like you should never let your quality suffer, don’t let your schedule suffer.  You only have so many Monday, Wednesday, and Thursday mornings – make them count.

OK, hopefully you learned something from our little talk.  I know it doesn’t seem like it, but I was like you once and I made it.  You will too.  Now, go wash up for dinner and I’ll see you downstairs.

Have you ever suffered from inconsistency?  What lessons did you learn?  Share a comment and let’s talk about it. 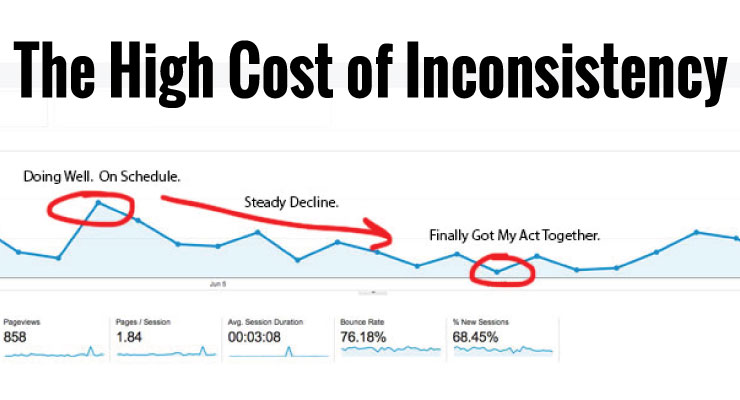 Article Name
The High Cost of Inconsistency
Description
Learn how inconsistent posting will definitely cost you in a number of ways. It impacts your Confidence, your Credibility, and your Community.
Author
Greg Dungan
Share This