The Only 3 Resources You’ll Ever Have 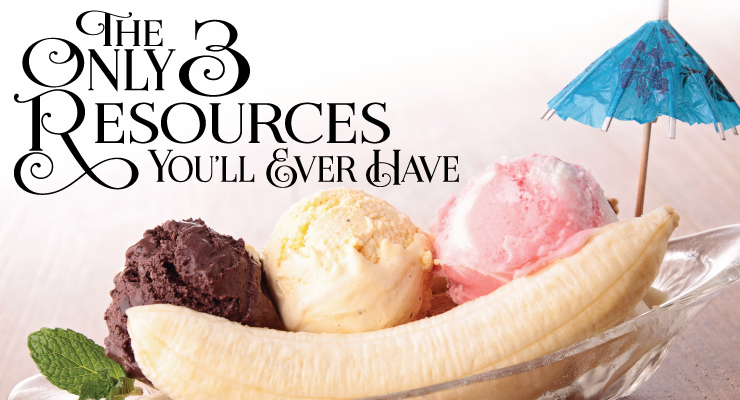 So what is an Entrepreneur?

I have found (as I’m sure you have too) that there are many stereotypical answers to this question.  You’re also likely to hear nearly as many variations from those who identify themselves as entrepreneurs as you are from those who do not. It has been my experience that people who refer to themselves as Entrepreneurs generally use that term to describe who they are as a person rather than what they do for a living.

Entrepreneurism requires a passion and drive that  (although can be acquired) seems to be built into a person’s personality.  So much so, that it colors the way they see the world.

Entrepreneurs find opportunity where others see struggle.  They prize freedom where others prize security.  They risk where others hedge. They push through when others cut their losses and regroup.  These tireless pursuers of possibility appear to make up a species all their own.

As someone who readily identifies myself as an Entrepreneur, I have long sought the secrets of how the magic works.

Perhaps you’ve asked these questions about yourself or someone close to you.  It’s likely that you’ve even formed an opinion about who someone is based on these questions.  Hey, I get it.  I’ve been questioned about this stuff for over 40 years.  It’s weird.  I accept that.

However, it isn’t unexplainable. So, gather round Kids.  I’m about to let you in on the secret that most Entrepreneurs don’t even know about Entrepreneurs.  I’m also going to explain why the title of this post doesn’t say anything  about them.

It’s All About Resources

There are only 3 resources in the world.  That’s it.  Whether you are a global corporation cash flowing billions of dollars or a sole proprietor just praying that the cash will flow from day to day, all are equal in this regard.

So what are these 3 resources?  They are Talent, Treasure, and Time.  Now before you go all humble pie on me and start talking about how you’re broke and don’t have any talent, just admit that isn’t true or stop reading this article, because you’re not in a place to hear what I’m saying.

But, if you can recognize that you have talent for something, some degree of personal wealth, and the same amount of time as everyone else in the world, then read on, McDuff!  Epiphany awaits!

Herein lies the beauty of talent.  Talent is Reliable.  That means that it is there for you to call upon at any time.  It’s never too late to nurture and grow a talent.  You can start anytime with the only limitation being your own desire.  If you want to learn to play the piano on your 80th birthday, go for it.  Nothing is impossible if the talent is in you to begin with.

The other wonderful thing about talent being reliable is that you can return to it as many times as you want.  Let’s say that you used to be a professional musician, but over time you got busy with other things and let your chops get rusty.  You haven’t lost anything.  You can return to those skills and, with a little work and discipline, get yourself back in shape to play out in no time.

The reliability of your talent will carry you through (and bail you out of) situations every day.  You probably lean on talents without even realizing that you do it.

Those are talents and everyone has them.

Treasure refers to your total combined material wealth.  Notice that it isn’t your account balance, liquid assets, or net worth.  Technically, it is your gross worth – the sum total of everything you have at your disposal make something happen.

Money is certainly part of your treasure, but so are all of your material possessions like your car, your house, your equipment, your tools, your computer, your phone, your tablet, and anything else that you own.

Herein lies the beauty of treasure.  Treasure is Renewable.  That means that if you use it or lose it, you can always make it back again through hard work and smart decision-making.

If your treasure is your totem, your ultimate goal is to attain it.  You will likely value it above other resources and struggle to part with it.  You’ll also probably struggle with the concept of “enough,” because there will always be treasure that you have not yet attained.

If treasure is your tool, you run the risk of undervaluing it.  This is often the cause of costly spending and inefficiency.  It also creates a conflict when your goal is to attain something that you don’t truly value.

The trick with treasure us to value it highly enough to use it wisely, but part with it easily enough to actually use it.  So often our interaction with treasure is guided by fear instead of faith.  We fear being without it.  We fear that we will lose it or that someone will take it from us.

Time is the most democratic of all resources.  Each of us has exactly the same amount of time in a day regardless of who we are.  Warren Buffett and I have the same 24 hours in which to work.

Our talents are different.  The amount of treasure we possess is vastly different.  But, our destinies are shaped within the same minutes and hours.

Herein lies the truth about time.  Time is Relentless.  Once it’s gone, it’s gone.  Unfortunately, unlike talent, it isn’t reliable.  Warren and I may have the same 24 hours today, but we may not have the same amount of years in our lives.

I have no idea how much time I have to live and work, so I can’t just return the well over and over like I can with my talent.

Time is also not renewable.  I can make a fortune, lose it, and make it back again – people do it all the time.  But, I can’t make time.  I can only use it wisely so as to provide myself with positive memories when it’s gone.  Its finite and fleeting nature is what makes time the most valuable resource of all.

You’ve heard it said that no one reaches the end of life and wishes he or she had worked more.  That’s probably true.  However, people reach the end of life all the time wishing that they had worked smarter.  It’s too bad that we don’t have a metric that measures the wisdom of our time usage.

So what does all this resource stuff have to do with Entrepreneurs?  And what is the answer to the original question?  Here it is.

Entrepreneur: Someone who uses the 3 resources of Talent, Treasure, and Time to solve problems for a profit.

Tomorrow, we’ll discuss 3 universal equations that ultimately decide the fate of your business.  Here’s a hint: they involve the resources in this article.  On top of that, I’ll tell you the secret of the Entrepreneur’s profit and why he is the richest person on earth.

Would you call yourself an Entrepreneur?  If so, would you trade being an Entrepreneur for anything in the world?  Share a comment and let’s talk about it.

Article Name
The Only 3 Resources You'll Ever Have
Description
There are only 3 resources in the world. That's it. Corporations and sole proprietors succeed or fail based on how they handle them. I'll show the secrets.
Author
Greg Dungan
Share This