How Nature Works Against You | And How To Beat It 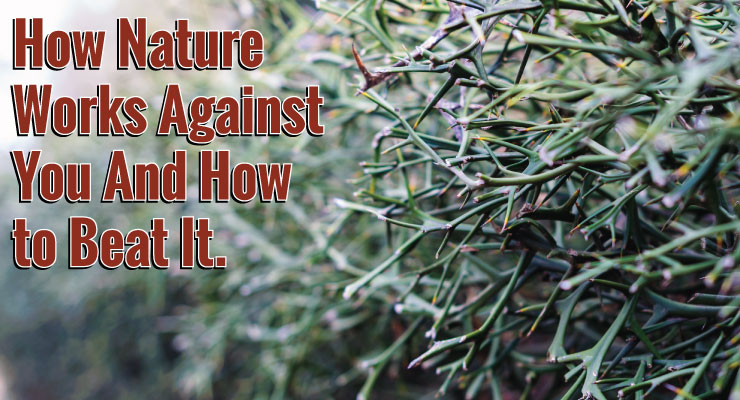 What’s written up there on the wall?

Wrong.  There is a very clear message written there.

It says, ‘Nature is Relentless.’

What does that mean?

It means that nature will always work against you.  Your nature is to blow off practicing because it’s hard.  Taking care of business means working against nature to become better than you are.

I learned that lesson over 20 years ago in college and it has remained true ever since.  Any time I’ve accomplished something that bettered me, I’ve had to work against nature to get it done.  The wild thing is that this rule is true in every area of life – marriage, parenting, faith, friendship, and especially business. 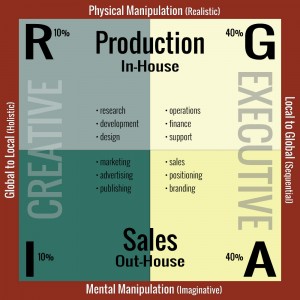 Remember back when we discussed the distribution of personality types?  I showed you that Artisans and Guardians each make up 40% of the world’s population.  That’s 80% of people in two groups (Pareto would be proud).  This means that the population of your company is likely to resemble this distribution and this is also where the majority begins to struggle.

If you look at the diagram over there, you’ll see that these personalities line up on the same side.  I’ve labeled this side “Executive” and the other side “Creative.”  Creatives represent 20% of the population and Executives represent 80%.

I made the case for creatives last week.  In that post, I also discussed the fact that there are some cities where creatives are more highly concentrated than others.  This means that, even though creatives comprise a full 20% of the population, their uneven distribution combined with your location could result in even fewer of them being available for you to hire.

The other thing you have working against you is what I call the “Immersion Factor.”  The Immersion Factor refers to a person’s ability to learn new abstract skills such as language, writing, and design.  It is often easier for folks to learn these things by immersing themselves in a larger population of people who have already mastered them.  It’s a sink or swim approach that capitalizes on our drive for survival.

Creatives learn everything by immersion.  We are immersed from the day we’re born by virtue of our minority status.  Therefore it is easier for us to learn executive skills than it is for executives to learn creative skills.  Executives can’t just go and immerse themselves in creatives.  We’re too scarce and spread out. Combine this with the next issue and you’ve got a real problem.

When examining the general populous, the diagram looks like the one on the right.  Artisans share a corner connection with Guardians and Rationals.  This is because they are the polar opposites of Idealists.  The same holds true for the other three types as well.  However, the workplace is different.  At work, each personality type is paired with it’s opposite in a department.

Google “parts of a business” some time and you’ll see that there are innumerable ways to carve up a company.  I’ve seen everything from four parts to twelve parts and everything in between.  For this article, I’m going go with only two.  I know it’s simplistic, but generally any company can be divided into two parts – Sales and Production.  See the ball-hit the ball.  Somebody has to make it and somebody has to sell it.

If we divide our workplace diagram into North and South halves, you’ll see the what I mean.  Each part needs a creative and an executive element.  For Production we have Rationals as our Creatives.  They are responsible for things like Research, Development, and Design of the products.  The Executive members of our Production staff are Guardians.  They are responsible for things like Operations, Finance, and Support.

The Creatives for the other half of our company are Idealists.  These folks handle our Marketing, Advertising, and Publishing.  Artisans are the Executives here.  They take care of things like Sales, Positioning, and Branding.  By balancing each half with creatives and executives we gain the expertise necessary to achieve success.  But we also reduce our ratio of creatives to executives.

I’ve already established the fact that Creatives are hard to find as 20% of the population, but when we reduce our target to just 10%, it becomes even more difficult to find and hire the people we need.

The third way that nature tries to stick it to us is with our approach.  One could argue that this is just an extension of the majority issue and maybe it is, but I think it’s worth exploring separately.  And, since I’m writing this post, that’s what we’ll do (Ha!  Creatives unite!).

With the Executives being the majority, their viewpoints will be the prevailing ones unless they limit themselves and account for the creative minorities.  The problem with this is that Executives are Sequential in their approach to work and Creatives are Holisitic.  By Sequential, I mean that they see the local things first and then extend to the global.  A Holistic perspective is seeing the global picture and then breaking down into local pieces.

This is why we struggle in our approach to content creation.  Guardians want to see it as management, because that’s how they see everything.  They are naturally part-to-whole or sequential in their processes.  Artisans are also part-to-whole or sequential in their approach to tasks in the workplace.  However, instead of seeing content creation as management, they see it as advertising.

As I stated in yesterday’s article, the truth about content creation is that it is neither management, nor advertising.  It’s Publishing.  You can’t manage something unless there’s a something.  Creation, by it’s very nature is making something out of nothing.  By the same token, you can’t sell stuff until there’s stuff.  And you can’t just sell all the time or you’ll wear out your customers.  This is why content creation is holisitic and all about giving.

Creatives give naturally.  Executives transact.  Both are essential elements of any successful business.

The final part of our discussion today has to do with the way we work things out.  I’m not talking about complaints and harassment – that’s what Human Resources is for.  I mean the way we experiment with concepts and perfect ideas.  There is a definite difference between the way Production people experiment and the way Sales people do it.

Production people prefer to work with things physically as they experiment.  Concepts are fine, but these folks want to test and try them using real stuff.  You have to let them move things around and see them with their eyes in order for them to digest your idea.  These are the “show me the numbers” and “show me a mock-up” members of the team.  It is much easier for them to edit and perfect an existing thing.

Sales people prefer to work with things mentally as they experiment.  They mainly deal with things that are outside the company.  These are your poker players.  They work things out in their heads so as not to give away any advantage in a negotiation.  And, make no mistake, with sales people everything is a negotiation. They want to talk about it and think about it while they spend enough time with you to figure you out.

When you consider these factors, you’ll begin to see why content creation, something seemingly simple, is so incredibly difficult for companies to accomplish.  Tomorrow, I’ll tell you how to win this game.  You have options.  You just need to know what they are and how to exercise them.  I’m also going to help you by giving you a very special download, so be sure to check it out.

Article Name
How Nature Works Against You | And How to Beat It
Description
Today I'm going to show you how nature works against your company when it comes to content creation. And tomorrow I'll show you how kick nature's butt.
Author
Greg Dungan
Share This